I haven’t been down to the beach to dip a piece of work in the sea for quite a long time. I seem to be having a creative rush at the moment with one piece of work following another. This is the first of several pieces to be sea dipped.

Words are becoming more important to me (an imperative really) and each of the works that I am making are a response to words that document the memory of an experience. I have given them the working title of ‘Fragments’.

The sun is warm on my back as I walk out to the beach,

but coming back the wind gets into my ears and chills them.

The blue sky is reflected upwards again by the shiny, smooth marsh:

Recent spring tides have moved the sand and mud.

Where before the marsh was formed into deep crevices;

it is now flat.

Where before the marsh was flat;

it is now sculpted into twisting channels 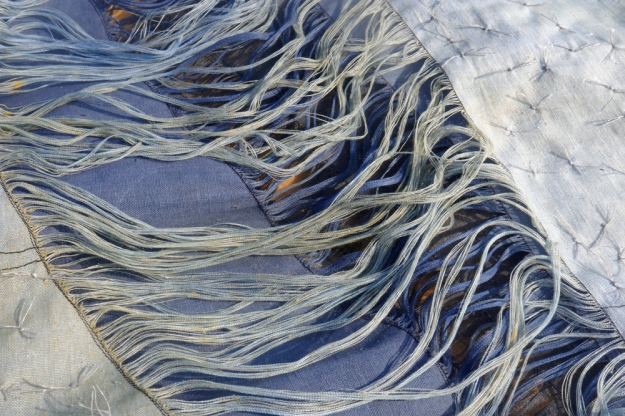 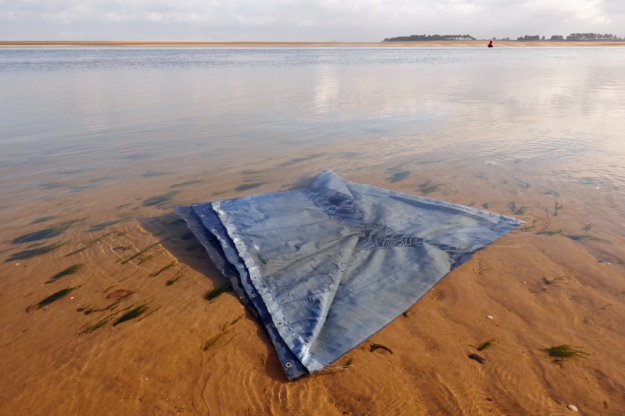 As I was dipping this in the sea (to rust the small iron wire eyelets sewn into the cloth) it occurred to me that although I was on Wells beach the experience that inspired the cloth was of another place. It is interesting that the memory of a place from then has been transcribed to now. The original memory has been reshaped and as a result another layer of meaning has been embedded into the cloth.

I’m back in Wells after a month down in Surrey. As always the first thing I do is to go for a walk to take the air and to see what’s what. It’s a mild day with little wind. The tide is coming in and although it’s mid afternoon the light is flat and is already beginning to fade. Here is my walk ….

The berries of the sea buckthorn stand out bright orange in the dull light. 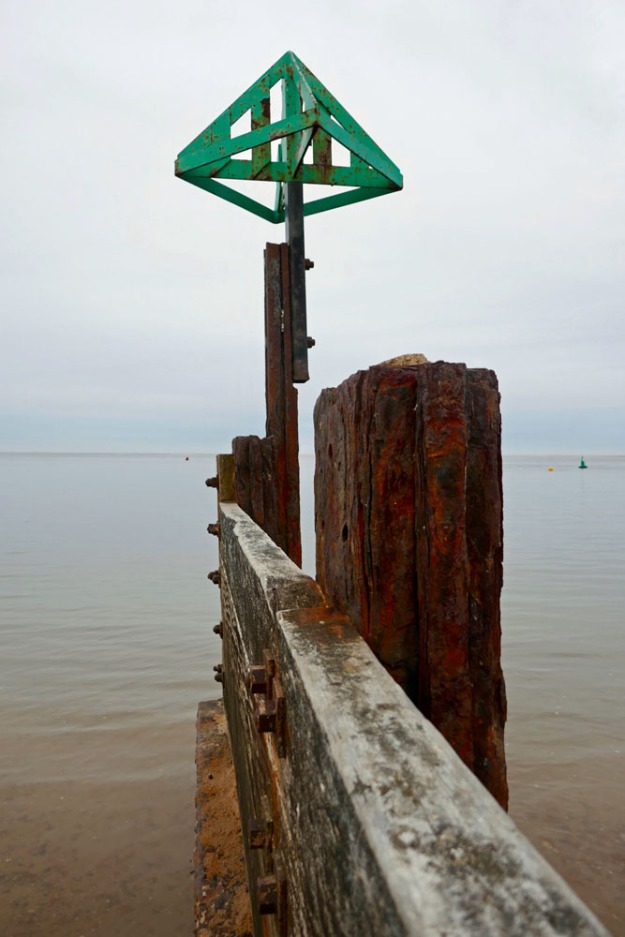 It’s a very lazy tide today and the sea laps gently up and around the groynes.

There are a couple of seals swimming around just off the beach. Rope barriers have been set up to give the seals a ‘safe place’ from dogs and humans – this one is very interested in one of the poles.

Cormorants head back inland to their roost. 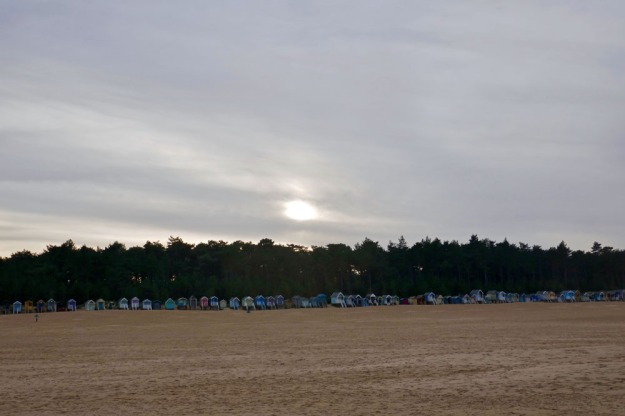 The sun, just visible through the clouds, falls fast at this time of year. 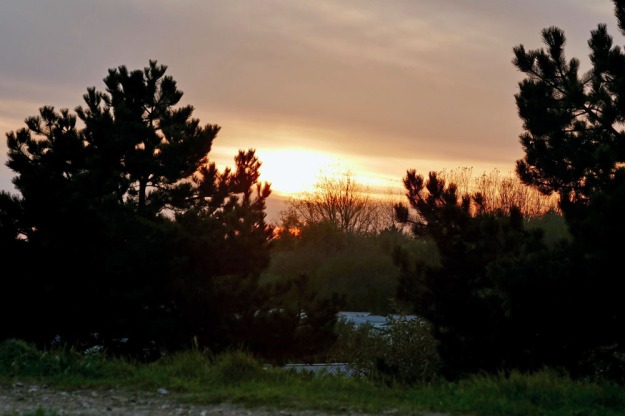 Its colour deepens the lower it falls. 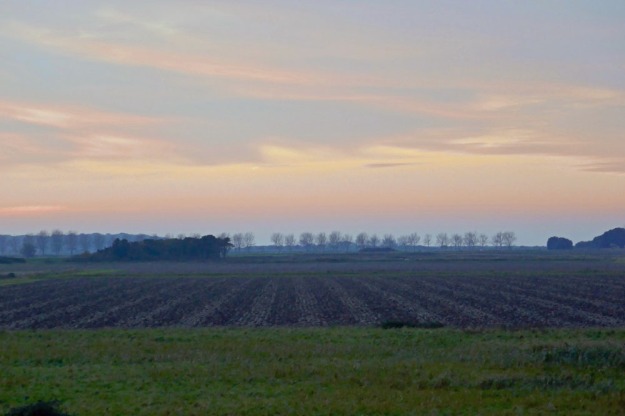 Across the fields towards Holkham a mist rises after the sun has set.

I have been walking along the SW coastal path all morning and have just arrived at Gurnard’s Head, a small headland on the North coast of Cornwall. With a tricky scramble over rocks I’ve managed to reach a rocky outcrop high above the sea. Exposed to the Atlantic I feel exhilarated.

I’m facing into the wind and looking straight out to sea. Behind me are cliffs and at 10 o’clock, in the far distance on another jutting headland, is the Pendeen Watch lighthouse. The granite rocks at the bottom of the cliffs are brilliant with yellow lichen – they shine, slick with seawater, in the bright sun.

In stark contrast, rising up behind the glassy rocks, are deep, dark fissures that have been worn into the cliffs by millennia of pounding seas. The shadows of these clefts are rendered so dark by the glaring sun that no detail can be seen within them. Small white seagulls wheel in and out of the black gullies, briefly showing in relief against the darkness before disappearing as they are backed by a white and blue sunlit sea. They glide round in slow, lazy loops, in turn emerging and vanishing.

As I face directly into the wind, it roars uninterruptedly in both ears. I only have to turn my head slightly to the left or right and the sound fades. I like the slightly chilly wind on my face in the warm sun.

Beneath me the sea boils. Waves constantly beat the rocks below; frothing up and pulling back. One rock slopes at 45 degrees into the sea. Pounded by waves, it is submerged in a coat of white sea spume before reappearing as the swell drags the beaten water back down again into the jade/blue translucent morass.

The sea is rarely like this in Wells. There, its soft grey/blue flatness creeps slowly backwards and forwards tide after tide. Here, on this part of the Cornish coast, the sea is energetic, heaving, rolling and frothed. Each wave is dashed violently against the land, its energy exhausted as it is flung upwards and outwards.

I am back in Thames Ditton after 10 (very hard-working) weeks in Wells. Although I’m sad to leave, I’m looking forward to a busy autumn. I have finished all the work for the Knitting & Stitching shows and I only have the details to sort out now. As a result I am beginning to feel a little bit excited! 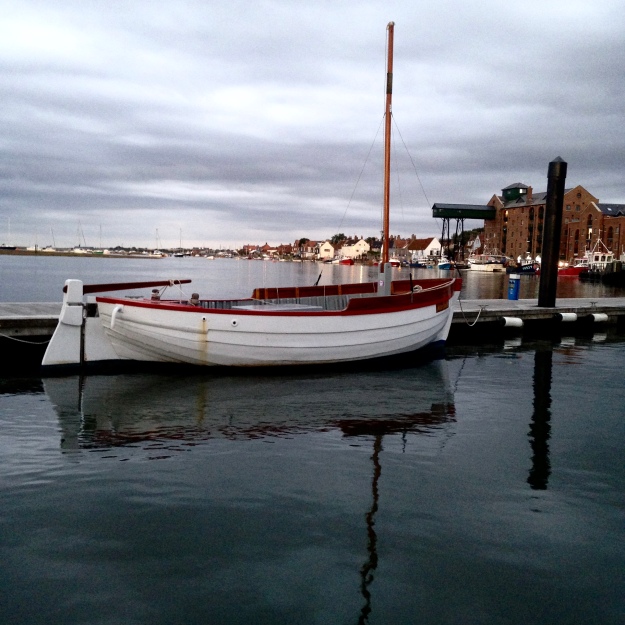 I went for a last stroll around Wells just after sunset last night. It was getting dark and it felt as if I was marking my territory until the next time I can be there which probably won’t be until after the London Show at Alexandra Palace

Here is what I saw as the light gradually faded. 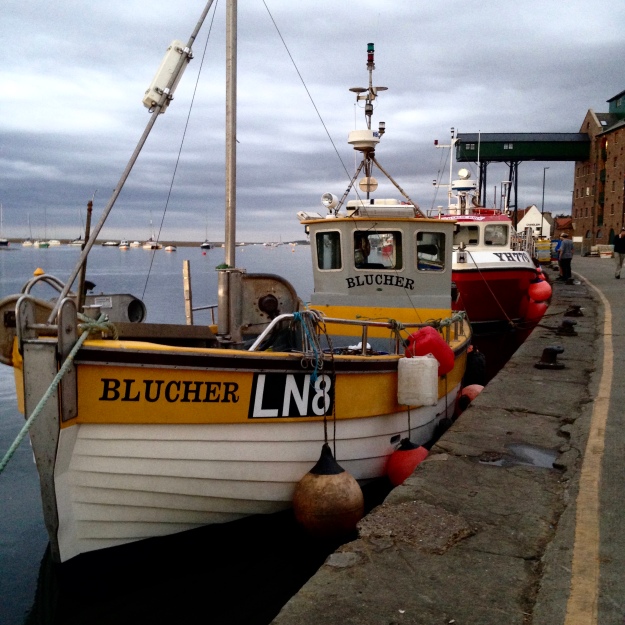 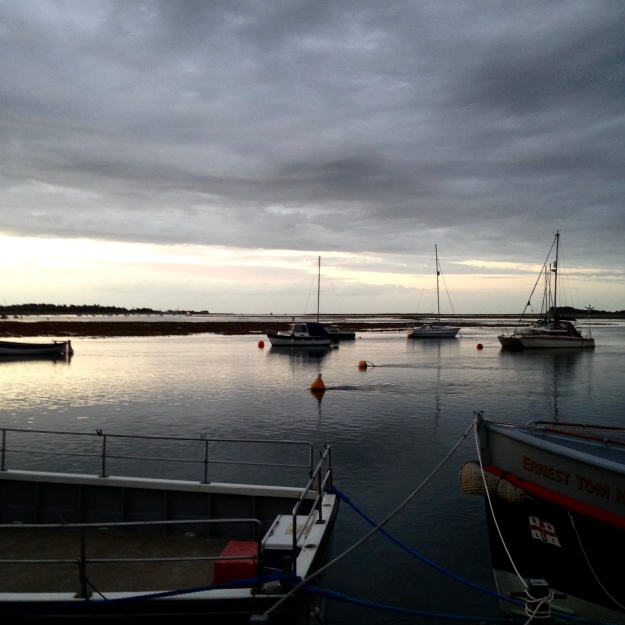 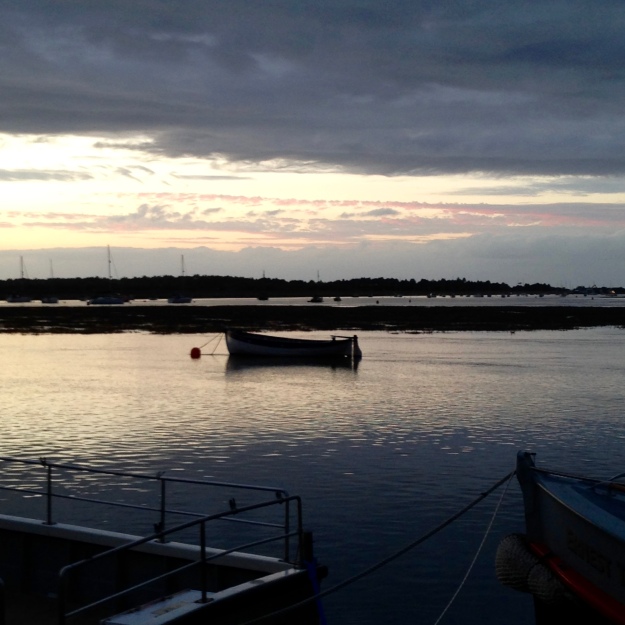 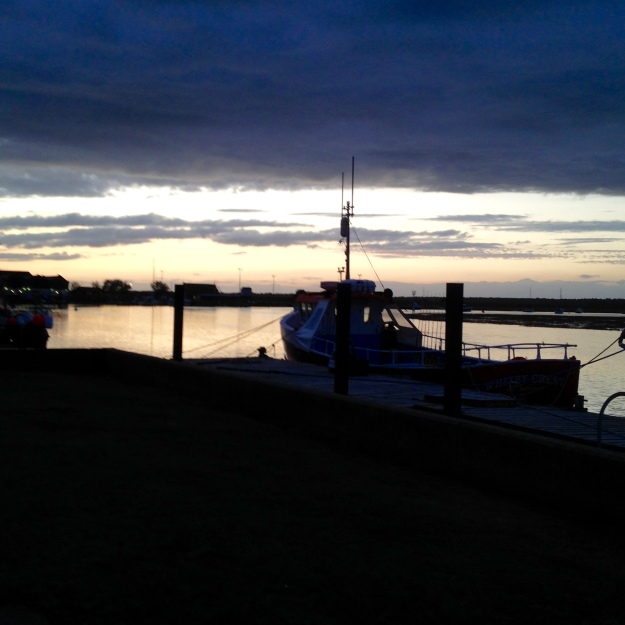 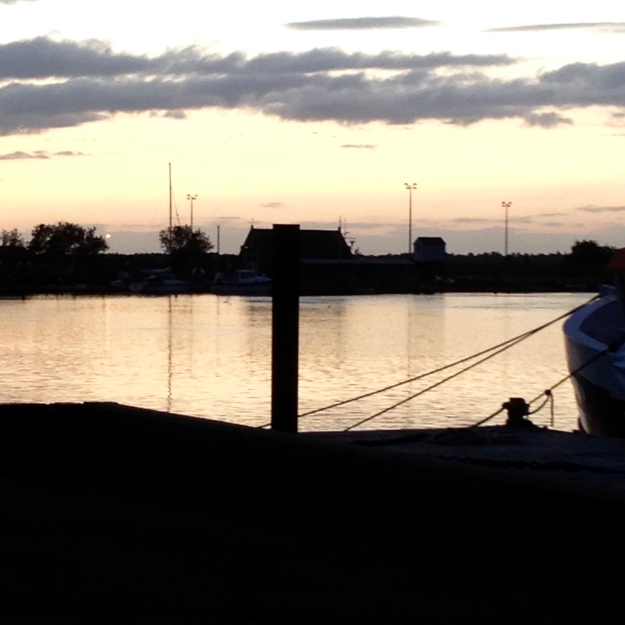 I have finally got to the stage with part of my latest piece of work where I can dip it into the sea and I have been thinking about why this process is so important to me. 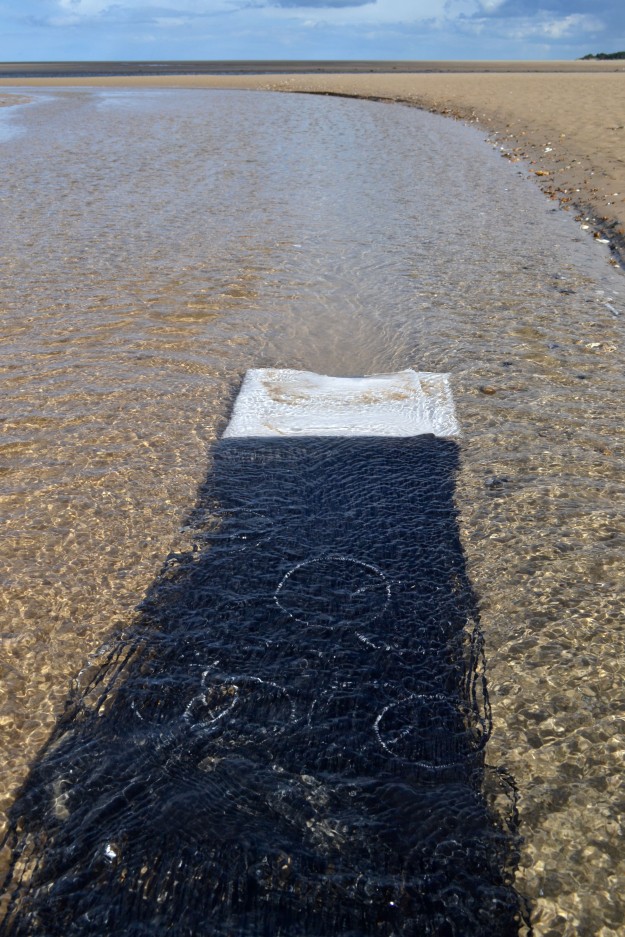 Recently, I have placed the finished cloths into the sea two or three times. This, I thought, was principally to rust the iron rings that I had sewn into them, but it has become obvious that the process of taking the cloth to water has more significance than just the visual effect of the rusting.

The cloths are inspired by vividly remembered encounters and engagements with the coast: processes, sights and sounds of the the sea, the beach and the marshland. Placing the work and photographing it in the environment that inspired it somehow brings the whole thought process back full circle.

For me the work I make in response to a place is about the experience of looking, touching, hearing, light and space. The work, for me, is not separate from the original experience. The energy of the place is within the energy of the piece, although its form and material come from my imagination. The introduction of the work to the place brings together two halves of a whole. 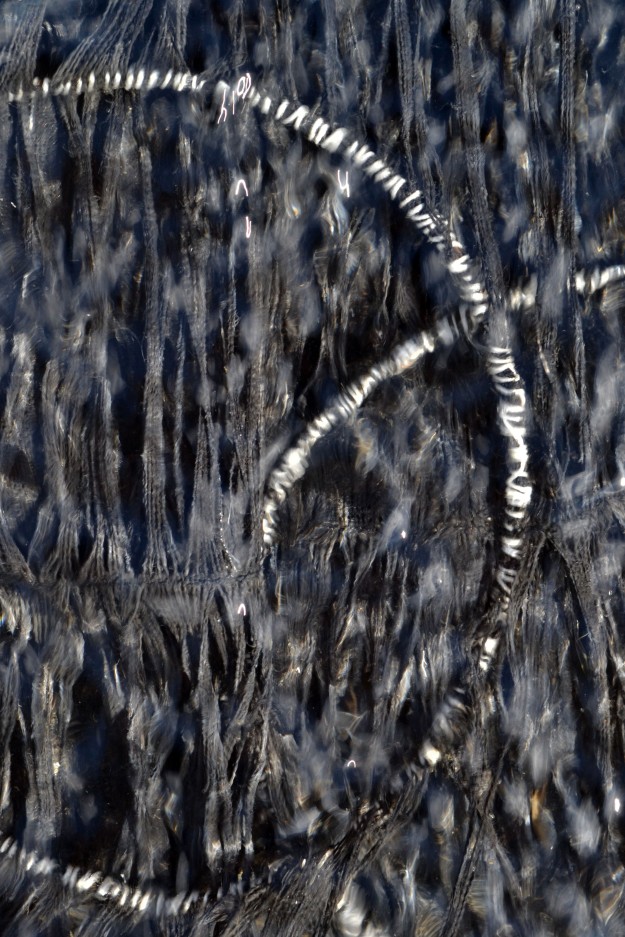 The photographs I take of this ‘introduction’ are not a work in themselves, but the documentation of bringing work and place together is highly significant to me and the photographs form a visual record of the act. The other record is of course the resulting rust marks that stain the cloth from the contact of sea and iron. 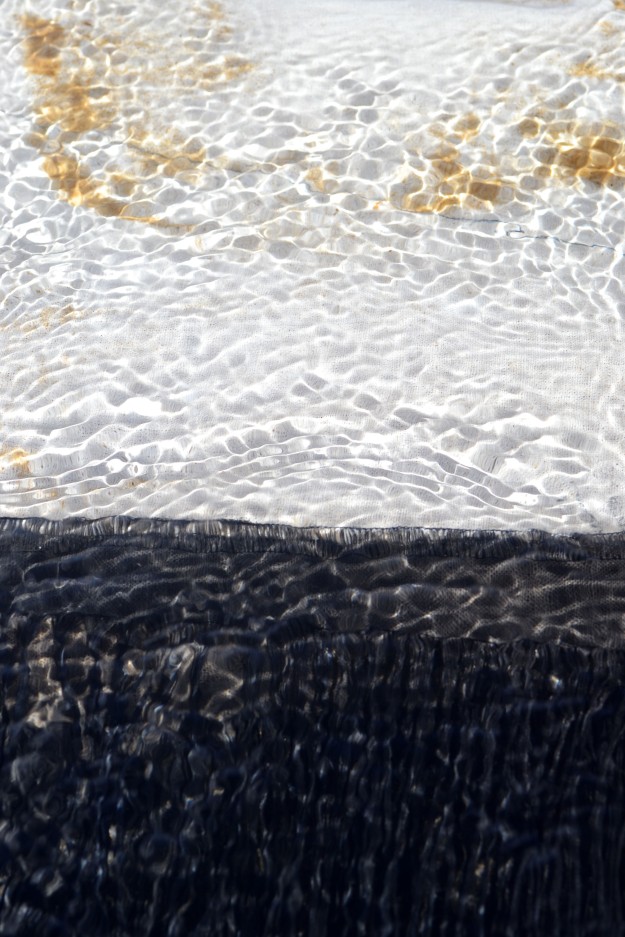 Without this baptism in the sea the work would not be complete.

This morning I went to Stiffkey for a mosey around. Boots, hat and gloves were needed as there was a sharp wind and it was cold, even though the sun was bright and its faint warmth occasionally managed to penetrate my waxed jacket. I had a backpack with a sketchbook and drawing stuff.

Picking my way along a path straight out towards the marsh the mud sucked at my boots. I had to scan the ground in front of my feet to find the driest, least slippery route – the slick, wetness of the mud would have had me over in a trice without concentration.  Although looking intently at the ground I was still aware of what was going on around me. A skylark hovered just above, its wings barely visible, flickering up and down as it rose higher into the sky, its song becoming fainter. My clumsy footsteps disturbed a flock of brent geese that rose, chattering, into the air and the wind ruffled the dry grasses either side of the path.

Out on the marsh I faced north, looked towards the sea and drew.

My tendency is always to look north – here on the North Norfolk coast the sea always draws me. The mutability of this edgeland is endlessly fascinating – nothing is ever the same as the tide washes in and out twice a day. But today I turned around and looked back towards where I had come from. The sun shone through a stand of trees on the edge of the marsh, their winter bones, lace, as they stood silhouetted against the fields beyond.

Sometimes it’s good to look round.

I have known for a long time how important drawing is to my practice and I also know that I tend to scribble things down in a rather inconsequential manner on scrappy bits of paper. Consequently I’m on a drive to do more drawing and to actually produce something worthwhile – something that works in it’s own right but that could also open up ways to extend my textile practice.

Some of you may have noticed some photos of etching plates popping up in my instagram feed in the sidebar. Printing is something I’ve dabbled in before – on my MA and other courses – but now I feel the time is right to set to and really understand the process so that I can begin to make the medium my own. I’m at the beginning, but I’m really enjoying the slow process of building up tonal layers on the metal plates.

Here are 3 drawings. They are studies or formative ideas for possible aquatint prints. I’m using my pen to get my mind around the layering process required.To stop out with varnish and dip in acid  again and again to produce light to dark tones. They are of course images of the saltmarshes in North Norfolk and are quite small – approx. 15×10 cms. 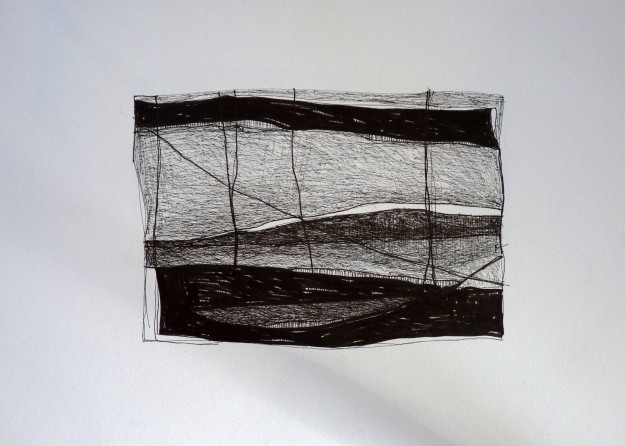 It may be a while before I’ve got a finished print, but I’ll keep you posted!

I am an artist and maker whose creative practice includes mixed media cloths, sculptures, installations and drawing. My inspiration comes from experiencing and paying attention to my surroundings. 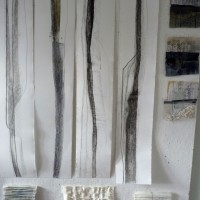 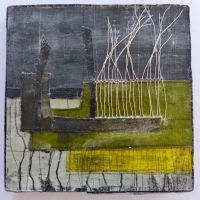 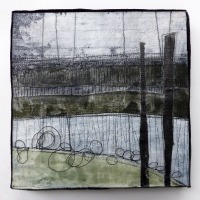 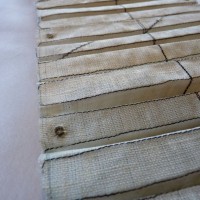 debbie lyddon
Create a free website or blog at WordPress.com.