I’ve been in the studio everyday recently making new work. I normally have several things on the go at a time and between all the stitching, painting and general making there are quiet times where I’m waiting for things to dry or when I just need to think.

Last week during one of these quiet periods I sat down at the window and with Radio 3 playing and a cup of coffee in my hand it was an opportunity just to look, to sit still and to be.

The tide was almost at its lowest point and water was still draining slowly out towards the sea. At low tide the main waterway in the channel is on the side furthest away from the studio, towards the northern bank, and tidal action has recently moved mud and sand so that it slopes down towards the bank on which the studio sits.

The water was falling away from the channel in small rivulets that rippled around and about sculpted sand and mud. Twisting and turning they merged and parted before finally coming together again in a smaller secondary channel to continue their gentle journey out to sea.

I drew this movement. 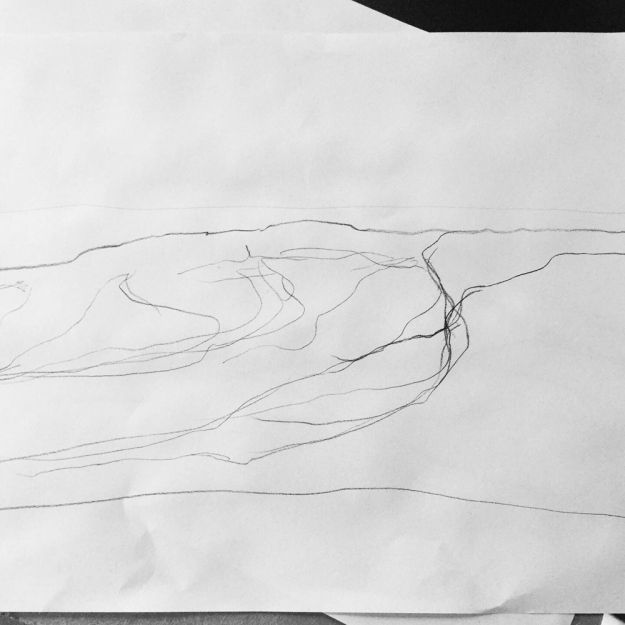 And then drew again.

Trying to capture the gently flowing lines of water moving.

So often I perceive music to be a visual art and I see its rhythms and spaces and melodies in my mind’s eye. But it is rare to make such a direct connection between what I can hear and what I see in front of me. I wouldn’t have thought of Pergolesi unless it had come on to the radio at that time, nor would I have associated it with the diurnal ebb and flow of the tide. I very much enjoy these infrequent moments of understanding.

Everyone is back where they should be after the Easter holidays and suddenly I find myself on on my own for a couple of days. Although I have things I should be getting on with, I decide to take a break and do some painting and drawing.

So, this is how a near perfect day on my own goes:

There is a ‘big’ high tide and I decide to go for a walk at Cley.  Driving past the quay at Wells I see the environment agency people out in full force and so decide to drive down to the quay at Blakeney on the way, just to have a look.

A strong northerly wind is pushing the water higher than it is supposed to go, and the water is lapping over Blakeney quay. When the wind pushes the tide in like this it becomes obvious why tall, sturdy poles line its edge. The boats strain their moorings as they level with the top of the quay and are pushed up against the restraining posts by the wind and the water; without these poles the boats would be grounded, high and dry, as the water ebbs away.

I carry on to Cley and driving down the road to the beach I can see enormous waves topping the shingle bank – it is going to be a dramatic sight. The car park just behind the beach is full of water; the sea seems to be seeping through the shingle and filling the lower ground. Out of the car I’m hit by the full force of the wind and quickly realise that a walk along the beach would be potentially dangerous as huge waves are crashing high up the beach, higher than I have ever seen them go before. In places they top the bank and surge down the other side onto the marsh.

As I stand and watch, other people appear, and also stand mesmerised by the boiling sea. They have cameras and take photos but I have nothing to record the scene with. Instead I just look.

Spray is blown high into the sky by the wind as the waves peak and then crash down. The sound is deafening: a loud, thundering roar that resonates deep inside you and the rasping, scrape of stones as they are pulled by the back draft. Seagulls are swooping low, flying just above the waves. They seem to be playing dare, as every now and then one flies below a breaking crest into the seething belly of the wave, before rising up again to glide, unconcerned, above the foaming water.

It’s hard to describe the power and insistence of the sea, but when I get home I do some drawings to try and capture its movement …. I think they are rather too tame!

I haven’t got any textile work to show you at the moment – I’m plugging away at a (large) cloth that I hope I will have finished sewing before Christmas. It is slow going, but I enjoy sitting down with radio 4 and stitching myself into a reverie. When my fingers get too sore (actually the inside tip of my right index finger) I put down the cloth and get on with something else. A couple of days ago I decided to tear up a sheet of rather nice Hot Pressed watercolour paper and do some drawing. Here are the results. They are all done from memory. 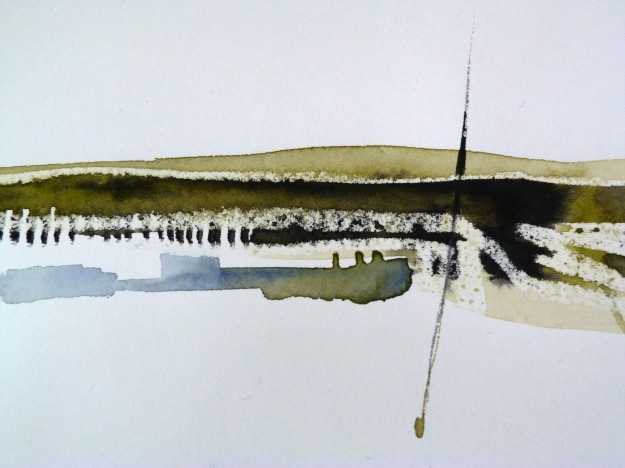 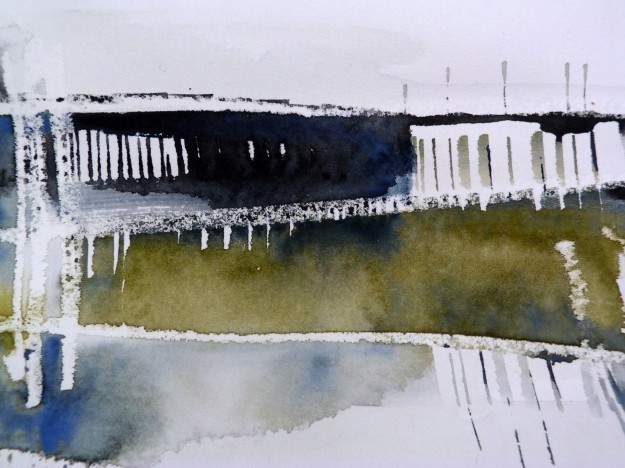 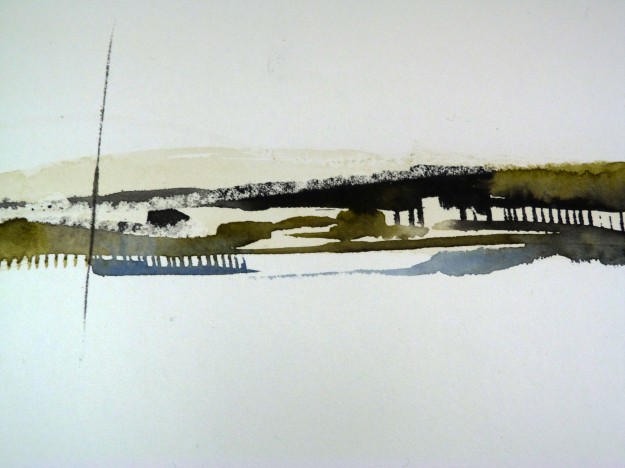 I am an artist and maker whose creative practice includes mixed media cloths, sculptures, installations and drawing. My inspiration comes from experiencing and paying attention to my surroundings. 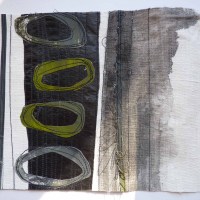 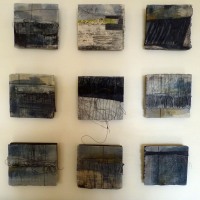 The studio hasn’t been this clean and tidy for ages. Ready for a workshop tomorrow.
Waxed and oiled muslin smock frock
This pebble is very Barbara Hepworth!